Welcome to the beginner tutorial for Pachyderm! This tutorial should take about 15 minutes to complete and introduce you to Pachyderm's original concepts.

This guide assumes that you already have Pachyderm running.

This tutorial walks you through the deployment of a Pachyderm pipeline that performs edge detection on a few images. Thanks to Pachyderm's built-in processing primitives, we can keep our code simple but still run the pipeline in a distributed, streaming fashion. Moreover, as new data is added, the pipeline automatically processes it and outputs the results.

Let's start by just adding a file, in this case an image, to a new commit. We have provided some sample images for you that we host on Imgur.

We also specify the repo name "images", the branch name "master", and the file name: "liberty.png".

Here is an example atomic commit of the file liberty.png to the images repo master branch:

We can check to make sure the data we just added is in Pachyderm.

Now you can view the file by retrieving it from Pachyderm. Because this is an image, you cannot just print it out in the terminal, but the following command will let you view it:

When you want to create your own pipeline specification later, you can refer to the full Pipeline Specification to use more advanced options. Options include building your own code into a container. In this tutorial, we are using a pre-built Docker image.

For now, we are going to create a single pipeline spec that takes in images and does some simple edge detection.

Below is the edges.json pipeline spec. Let's walk through the details.

The pipeline spec contains a few simple sections. The pipeline section contains a name, which is how you will identify your pipeline. Your pipeline will also automatically create an output repo with the same name. The transform section allows you to specify the docker image you want to use. In this case, pachyderm/opencv is the docker image (defaults to DockerHub as the registry), and the entry point is edges.py. The input section specifies repos visible to the running pipeline, and how to process the data from the repos. Commits to these repos will automatically trigger the pipeline to create new jobs to process them. In this case, images is the repo, and /* is the glob pattern.

The following text is the Python code run in this pipeline:

What Happens When You Create a Pipeline¶

You can view the job with:

You can check the state of your pipeline by running pachctl list pipeline.

Yay! Your pipeline succeeded! Pachyderm creates a corresponding output repo for every pipeline. This output repo will have the same name as the pipeline, and all the results of that pipeline will be versioned in this output repo. In our example, the edges pipeline created an output repo called edges to store the results written to /pfs/out.

The output should look similar to:

Pipelines will automatically process the data from new commits as they are created. Think of pipelines as being subscribed to any new commits on their input repo(s). Also similar to Git, commits have a parental structure that tracks which files have changed. In this case we are going to be adding more images.

Let's create two new commits in a parental structure. To do this we will simply do two more put file commands and by specifying master as the branch, it automatically parents our commits onto each other. Branch names are just references to a particular HEAD commit.

Adding a new commit of data will automatically trigger the pipeline to run on the new data we have added. We will see corresponding jobs get started and commits to the output edges repo. Let's also view our new outputs.

In the montage pipeline we are combining our multiple input data repositories using a cross pattern. This cross pattern creates a single pairing of our input images with our edge detected images. There are several interesting ways to combine data in Pachyderm, which are discussed in pipelines' concepts and our pipeline specification page.

We create the montage pipeline as before, with pachctl:

The pipeline creation triggers a job that generates a montage for all the current HEAD commits of the input repos:

View the generated montage image by running one of the following commands:

Exploring your DAG in Pachyderm Console¶ 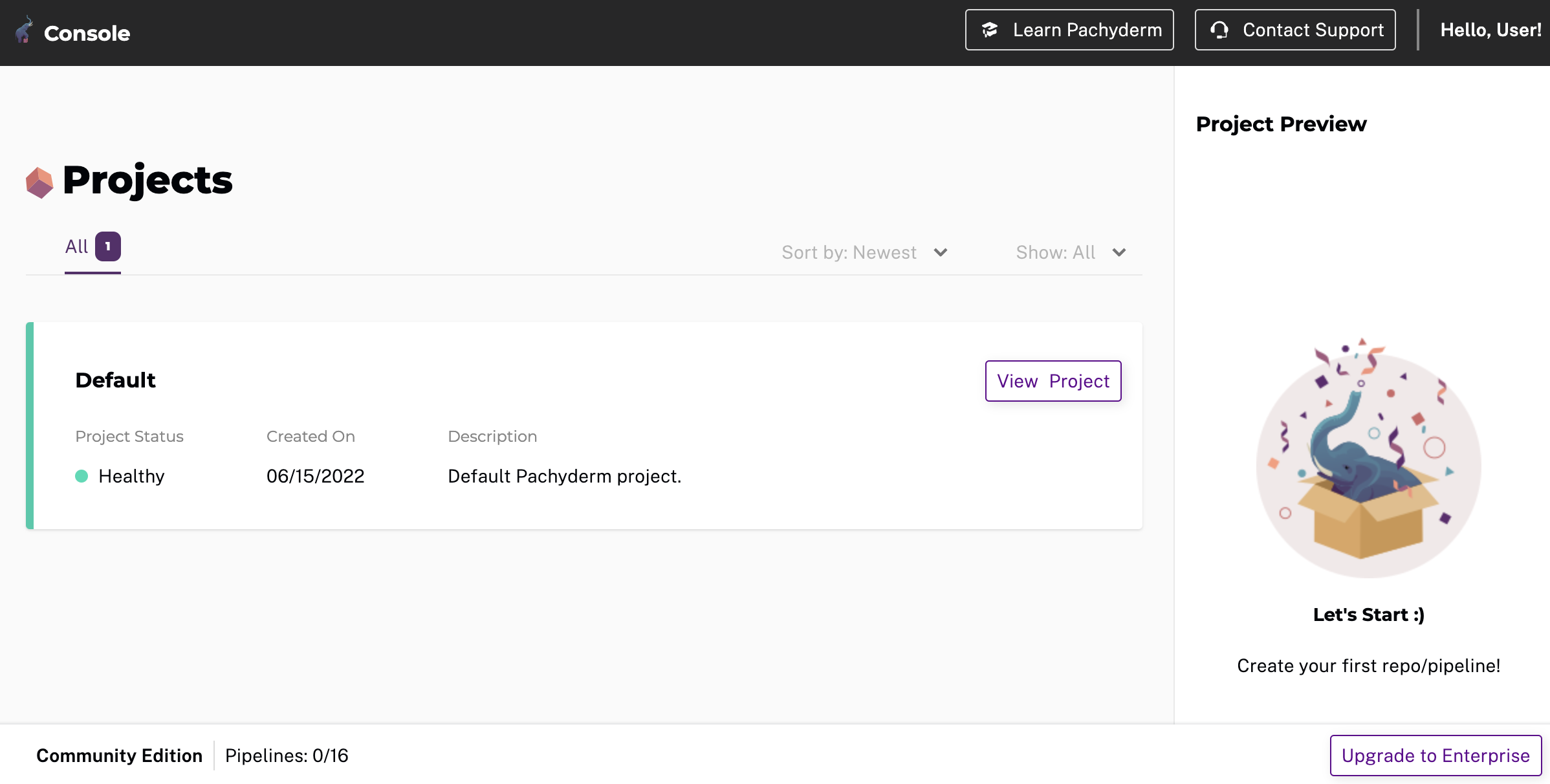 Upon clicking on your default Project (We are working on allowing you to organize your DAGs and teams by Projects), you will be able to see your DAG's structure, and interactively explore your repos and pipelines:

Click on a repo to visualize its commits, see the related jobs, or inspect the files of a given commit:

Or click on a pipeline to visualize its specification file, list its jobs, or view the details of a particular job.

Again, we would love to help and see what you come up with! Submit any questions, comment, contribution on GitHub, Slack, or email at support@pachyderm.io if you want to show off anything nifty you've created!