A datum is a Pachyderm abstraction that helps in optimizing pipeline processing. Datums exist only as a pipeline processing property and are not filesystem objects. You can never copy a datum. They are a representation of a unit of work.

When new data comes in (in the form of commit(s) in its input repo(s)), a Pachyderm pipeline automatically starts a new job. Each Pachyderm job consists of the following stages:

In this stage, Pachyderm creates datums based on the input data according to the pipeline input(s) set in the pipeline specification file.

The pipeline uses your code to process the datums.

Your code writes output file(s) in the pfs/out output directory that Pachyderm creates automatically for each pipeline's job.

The output produced by a pipeline's job is written to an output repo of the same name (i.e., output repo name = pipeline name).

The content of all /pfs/out is combined in a commit to the pipeline's output repo. This generally means unioning all the files together.

If two outputted files have the same name (i.e., two datums wrote to the same output file, creating a conflict), then an error is raised, resulting in your pipeline failure.

Avoid this anti-pattern from the start by having each datum write in separate files. Pachyderm provides an environment variable PACH_DATUM_ID that stores the datum ID. This variable is available in the pipeline's user code. To ensure that each datum outputs distinct file paths, you can use this variable in the name of your outputted files.

5. Next: Add a Reduce (Merge) pipeline¶

If you need files from different datums merged into single files in a particular way:

The example that follows illustrates this two steps approach.

In this example, we highlight a two pipelines pattern where a first pipeline's glob pattern splits an incoming commit into three datums (called "Datum1" (Red), "Datum2" (Blue), "Datum3" (Purple)), each producing two files each. The files can then be further appended or overwritten with other files to create the final result. Below, a second pipeline appends the content of all files in each directory into one final document. 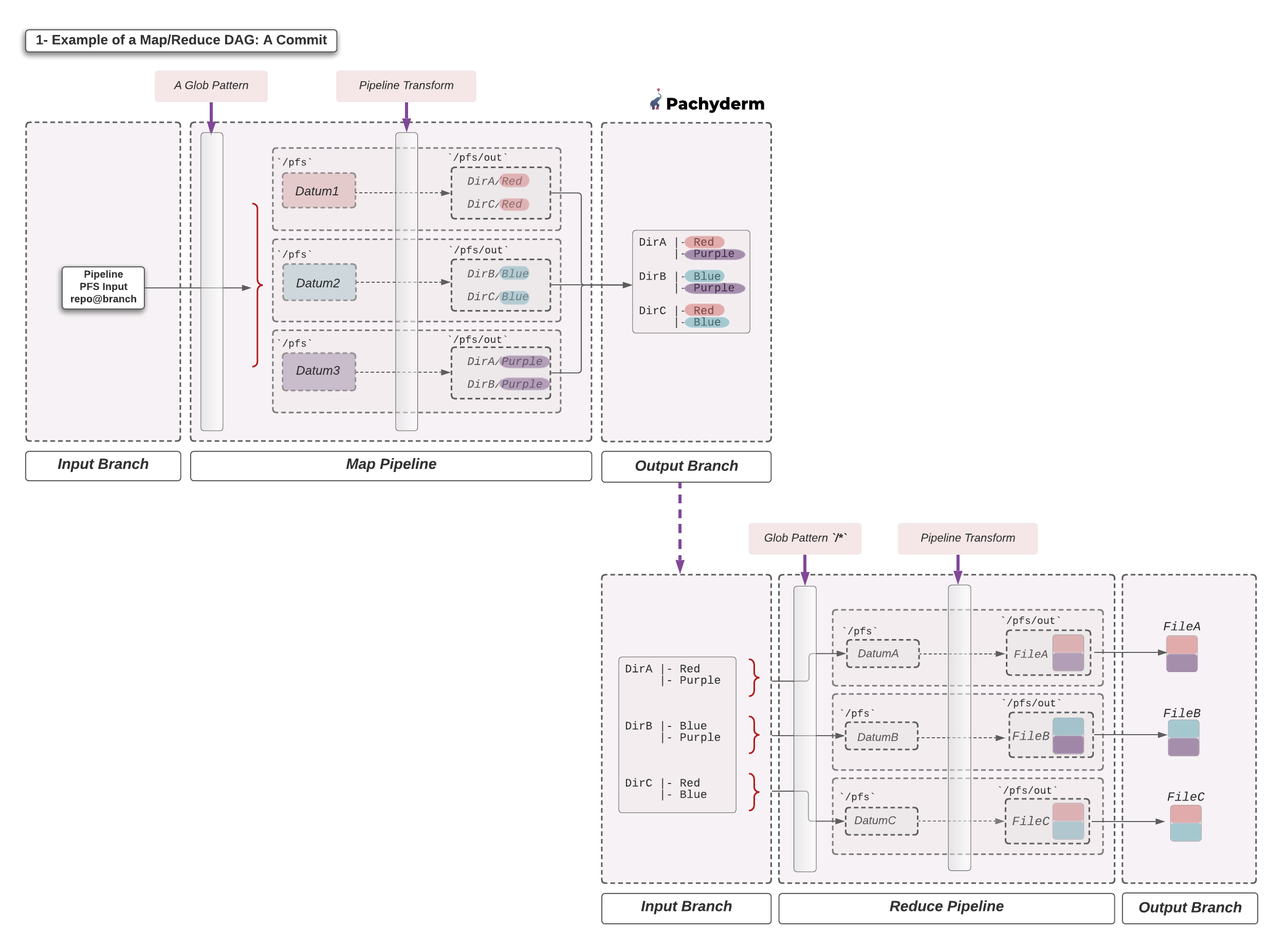 Let's now create a new commit and overwrite a file in datum 2, Pachyderm detects three datums. However, because datum 1 and datum 3 are unchanged, it skips processing these datums. Pachyderm detects that something has changed in datum 2. It is unaware of any details of the change; therefore, it processes the whole datum 2(') (here in yellow) and outputs 3 files. Then, the following pipeline aggregates these data to create the final result. 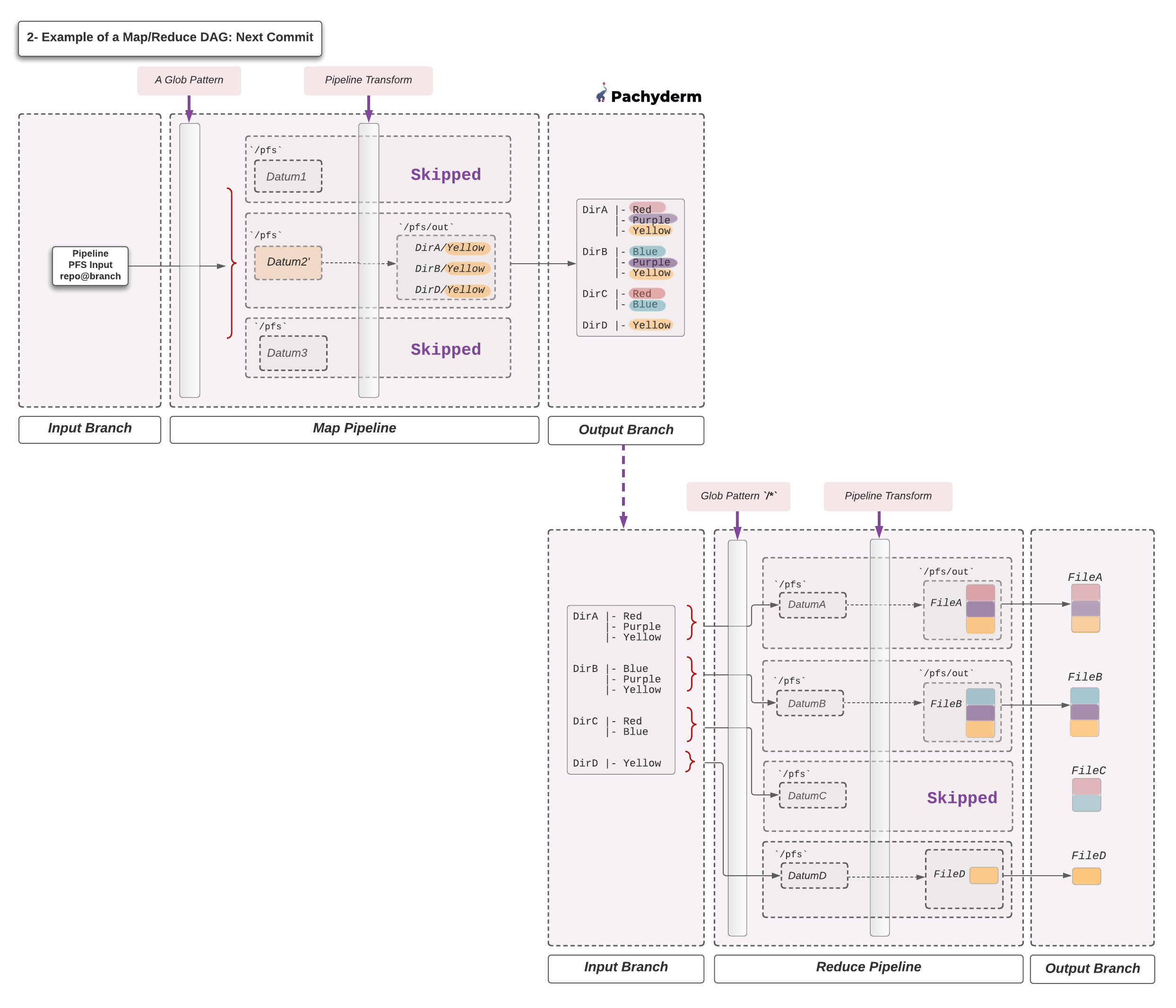 In Pachyderm, unchanged datums are never re-processed. For example, if you have multiple datums, and only one datum was modified; Pachyderm processes that datum only and skips processing other datums. This incremental behavior ensures efficient resource utilization.

By default, Pachyderm overwrites new data. For example, if you have a file foo in the repository A and add the same file foo to that repository again by using the pachctl put file command, Pachyderm will overwrite that file in the repo.

For more information, and learn how to change this behavior, see File.

Pachyderm only controls and wipes the /pfs directories between datums. If scratch/temp space is used during execution, the user needs to be careful to clean that up. Not cleaning temporary directories may cause unexpected bugs where one datum accesses temporary files that were previously used by another datum!